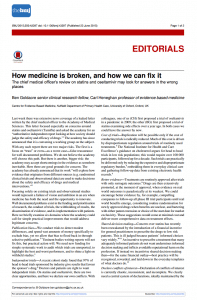 Last week there was extensive news coverage of a leaked letter written by the chief medical officer to the Academy of Medical Sciences. This letter focused especially on concerns around statins and oseltamivir (Tamiflu) and asked the academy for an “authoritative independent report looking at how society should judge the safety and efficacy of drugs.”1 The academy has since announced that it is convening a working group on the subject.

With any such report there are two major risks. The first is a focus on “trust” or even—as a worst case—false reassurance for well documented problems. We do not believe the academy will choose this path. But there is another, bigger risk: the academy may accept shortcomings in the evidence as somehow inevitable. Here there are good grounds for concern. The academy has already announced that its work “will explore how evidence that originates from different sources (e.g. randomised clinical trials and observational data) are used to make decisions about the safety and efficacy of drugs and medical interventions.”2

Focusing solely on existing trials and observational studies would represent a failure of vision and ambition in an era when medicine has both the need and the opportunity to innovate. Well documented …

read more here at the BMJ